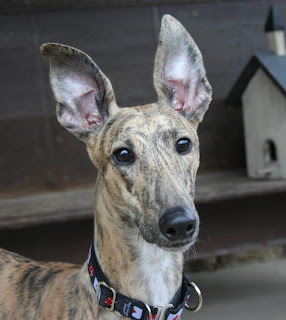 It seems almost unbelieveable that we are including a very young puppy in the Rainbow Bridge section of this blog. But we sadly report that our group is deeply mourning the loss of a wonderful and sweet young dog that passed way before his time. Cheerios was born at the farm in August of 2009. His mother died shortly after his birth, leaving him and his littermates without a mom. However, the puppies were successfully fed by another brood mom who took them in as her own. All of the dogs did very well.

But Cheerios became very ill and for a long time, it was not certain whether he would make it through this illness. But after his caregivers refused to give up on him (and he spent a long time in the hospital), Cheerios rallied and bounced back into a normal happy puppy.

He spent his days on the farm in foster care and got lots of love and attention. When Helen Coleman asked us to find a puppy that she could adopt, we immediately thought about Cheerios. Because of his illness, he needed to go into a home where the adopter was not only experienced, but knowledgeable about taking care of possible special needs dog. Helen never flinched when we told her about Cheerios. She immediately said “YES” when we asked her if she could handle a dog like Cheerios. Helen had raised two greyhounds from puppies to adults. She was no novice.

We brought Cheerios to her in mid March. He was happy and healthy and raring to go into his new home. Helen had already started posting Cheerios’ antics on our forum. We had a separate puppy section in our on line forum and everyone was looking forward to reading about Cheerios’ exploits and seeing photos as he grew.

Shortly after arriving, Cheerios came up limping after running in his back yard. Helen knew that it was more than just a bump. They went off to the vet and x-rays confirmed that Cheerios had a problem with the growth plate in his rear leg. He was scheduled for surgery the following week to correct the problem and be neutered. He came through the surgery wonderfully.

He was in good hands with Dr. Benson, a very experienced greyhound veterinarian. Dr. Benson was pleased with how the surgery went. However, Cheerios had a seizure shortly after the surgery and nothing Dr. Benson and his staff did could revive him.

Everyone is shocked and in grief over the loss of a beautiful and sweet puppy. It’s hard to put into words how this has affected all of us at FFGR, Inc. We know that Cheerios had a wonderful home with loving people while he was alive. We know that he is romping and playing and getting into trouble at the Rainbow Bridge. God speed sweet little boy.