Join Fast Friends Greyhound Rescue, Inc. adopters and volunteers for this special fund raiser! Come to Wendy’s restaurant in Frederick, Maryland on Sunday, October 3, between the hours of 1 p.m. and 3 p.m. and buy lunch. Wendy’s will donate 10% of your purchase to our group! Bring your family and tell all of your friends. The more people who come and eat lunch, the more money our group will make. We will be in the parking lot with our hounds for a get-together and to talk to people about greyhound adoption. Join us for this fun event, have lunch and help us earn money for our hounds!

Are you an Ebay seller? Do you list items to sell on Ebay? Well our organization is a part of Ebay! Our rescue group is a recognized charity on Mission Fish.

Here’s how it works:

If you sell an item on Ebay, you list it as you normally would. When you list your item, you will go to Mission Fish and pick our organization to donate to (click on the blue and yellow ribbon) and then list a percentage of the proceeds to share in the sale. You can list an item for a percentage or all of it to benefit our organization.

● Once the item is listed, the bidding begins on Ebay (our group would reserve the right to cancel an item listed on our behalf as we get notice of the listing).

● If the item sells, the seller gets paid by the buyer and ships the item – same as always.

● Mission Fish collects the donation from the seller, pays our organization, and provides a tax receipt to the seller.

Mission Fish also gives organizations like ours the ability to do an on line auction to benefit our group. We hope to get one scheduled soon.

If you like to sell things on Ebay and/or are interested in putting together an auction for our group (we have all the items, photos and descriptions), please contact Hettie at Hettie@myactv.net. 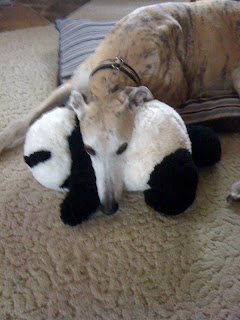 We are sad to report that yet another greyhound crossed the Rainbow Bridge. Rob Robinson, who adopted Demetri, called us to tell us that Demetri had not been feeling well and seemed to be in some distress. He took Demetri to the emergency animal hospital only to lose him there. There was nothing the veterinarian could do to help him.

Rob and Greg are quite devastated over the loss of their beloved Demitri. They have two other greyhounds, Heidi and Danti. Rob adopted Heidi from our group several years ago.

Rob, along with his (and our)friend Paula, helped our group for a long time by hosting meet and greet events and doing other work for our group. Both had to step back because of medical problems, but they stay involved with our group and are very much a part of our FFGR, Inc. family. They are very devoted to their greyhounds and have been in greyhound adoption for many years. We know that Demetri had a wonderful home. He was cherished by Rob and Greg and we know that they will grieve a long time for their sweet boy.

Godspeed Demetri, you will be missed very much. 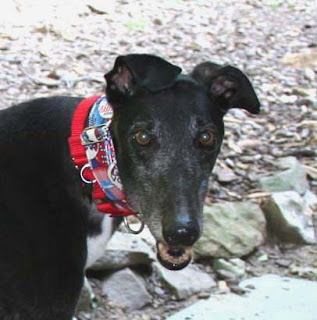 Another one of our very special greyhounds has crossed the Rainbow Bridge. Doug Boy (Wugs) was adopted by Jackie and Curt from Craiger’s List. He came to us from another group. He had been adopted by a kennel worker when he was done racing but his owner died, leaving Wugs without a home. We saw his story and offered to bring Wugs here to find him a home.

Wugs was adopted by Curt and Jackie in July of 2009. Although he was in his home a relatively short time (a little more than a year), he was greatly loved. He developed problems with incontinence and had other neurological issues.

We received the following email after talking to Curt and Jackie about Wugs. We knew that he was not doing well and were concerned that he was ready to cross over the bridge:

Lissen up: Keep your eyes out for Doug Boy. He’ll is joining you at the Rainbow Bridge today. He’s a huge black boy with a very grey muzzle. Take good care of him ’til Jackie and I join him. He’s not too tough–oh, he’ll pay more attention if you call him Wuggles.

He’ll tell you he was a VERY good boy, but that his neurological stuff started to fail. He often didn’t know who he was or where he was or who we were.

Wuggles: thanks for the joy and love you brought us. We will remember you forever. Nora says “Hi.” elsif sends a growl.

We are always sad to hear of one of our Craiger’s List dogs passing. But we know that there are special people who do not mind that they are older, infirm, not necessarily the most adoptable dogs and/or may have only limited time. We are thankful that Wugs had the chance for happiness and love in his last year of life. Since dogs live in the moment, Wug’s last moments were spent with those who loved him.

Godspeed, you wonderful boy. You were truly special and we know you have a special place at the bridge.

Once we get back from our vacation, we will hit the ground running as we have lots of events coming up in the months ahead.

We hope that you enjoy the last holiday for the summer season!!!!

We have maintained a great web page that contains information for all greyhound adopters. It’s a little used page of our web site that has tons of information right at your fingertips. Do you want to know more about greyhounds? Do you have a training issue? Medical issue? Do you need to find a boarding kennel in your area? Do you want to look for your greyhounds’ littermates? Do you need to find the phone number and/or web site address of your closest emergency vet? Do you have a question about poisonous plants, etc. that might harm your dog? Do you want to learn more about what to do if your greyhound gets lost?

Then look no further!!! Everything that we could think of is included on our Greytlinks page. We suggest that you check it out and then bookmark the link. You can even print the page to have it close at hand if you have a question or concern.

We try to provide the best and most up to date information to our adopters – and it’s all in one place!

If you have a suggestion for what we can add, please let us know. Happy reading!

Come join Fast Friends Greyhound Rescue, Inc. at the Greyhound Pets of America (Maryland Chapter) Picnic! Our group will be vending at the picnic. Come visit us and look at all of the GREYT merchandise we will have to sell. ALL sales benefit our greyhound adoption organization and help us help the hounds. We will be bringing all of our usual merchandise as well as our assortment of concrete garden statues and some new hand made wind chimes and hand made bling for your hounds! The GPA picnic is open to all greyhound volunteers, adopters and friends. We have posted the information below (including directions):

The Public is invited. Takes place rain or shine.
Door prizes will be awarded throughout the day.
$2 Donation per family helps pay for the park.
Call 800-600-8607 for more information