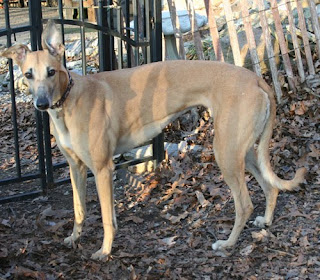 We got word from Vivian Ewell, who lives in Thurmont, that she lost her beloved Chloe. Chloe got sick a short time ago and Vivian took her to her vet. She did not feel that she had a diagnosis that she fell good about. They also told her that Chloe needed a dental. We advised her to go to another vet and Vivian took Chloe to the Waynesboro Veterinary Clinic, a vet who knows greyhounds in this area. Here’s what Vivian wrote:

Dr Becker was great. We decided to go with medication for Chloes’ teeth. As for the limp, she xrayed her hip and thought it was hip dysplasia. I took her back about two weeks later, she was losing weight and still limping off and on. Dr. Becker took a chest xray because she felt Chloe was not breathing right and she heard something. The xray showed many tumors, either cancer or histoplasmia? She decided to send away bloodwork and they called on Sunday. It was not the histo problem and it seemed clear that they were waiting for me to accept the lung cancer. In the meantime Chloe only ate a little baked chicken, a few drops of food, or peanut butter filled Kong. I could see her melting away before my eyes. Her breathing became labored or noisy at times. After talking again to Dr. Becker on Monday, I decided to try to keep Chloe thru the week but within the hour it was obvious that Chloe was only waiting on me to do the right thing. I called the vet and they put her to sleep in the afternoon. I wish there had been more help for Chloe but she is now running her own race and enjoying the wind blowing over her skin. Thanks for all your help and the opportunity to adopt Chloe, Vivian.

Vivian adopted Chloe in February of 2009. Chloe died two days after her seventh birthday. I know that Chloe had a great home.