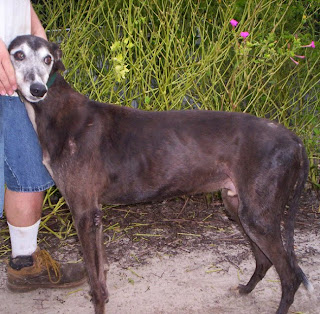 Washington is the call name of R Raisinaruckus. Washington got his call name because he was born on George Washington’s birthday. He was an awesome racer for many years and then was used as a stud at the Roban Kennels farm in Florida where his owners took good care of him. They decided, at the age of eleven, that perhaps he would like to have a soft couch to sleep on and a nice home to spend the rest of his retirement years. They thought he might like having a person to call his own. Our group offered to take Washington. They had him neutered for us.

The problem, as always, was how to get Washington from Florida to Maryland. We tried on numerous occasions to find a way for Washington to get to us. We didn’t want to put him on a hauler because of his age. And Greyhounds Reach the Beach was coming up and that kept us very busy.

While Washington was waiting on us, he started going downhill. He lost the ability to get up and get around. They decided at the farm that he was not well enough to travel. This was just at the time that we found a ride north for him. Washington is now at the bridge. He never made it here and never found that couch. We have to say that he touched us deeply when we saw his photo. We felt that if he did not find a home anywhere else, he could stay at the Ballweber house for as long as he had left in his life.

Perhaps this was for the best. It would have been a tragedy to have him die on the way to Maryland or get sick on arrival. He only knew the people at the farm and we know sure, to him, it was home.

Rest in peace dear boy We never got to meet you but we all love you.