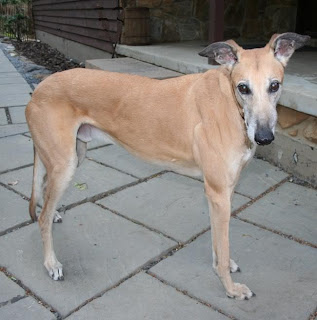 We are heartbroken to report that we had to let Magic go to the Rainbow Bridge the day after Thanksgiving. In the previous two weeks, the cancerous tumor on his nose (that had been diagnosed months ago) seemed to take on a life of its own. It seemed to grow a little more each day. He also started pawing at it at times. He started licking around his mouth and swallowing and when we checked inside his mouth, we saw some blood. It looked like the tumor was getting ready to burst (if it hadn’t already started). We decided that we could not let this get any worse.

This has been a particularly bittersweet journey for us. It was about watching Magic’s tumor grow, knowing that, otherwise, he was a very healthy dog. He came to us with a small lump that eventually was diagnosed as a slow moving cancer. The tumor was too involved with the blood vessels in his nose to do surgery without the risk of him bleeding out. The tumor would not have gone away but would have returned eventually. Radiation would have held that back for a short time, but it was expensive and would only serve to hold back the advancement of the cancer, not stop it. He was nine years old and we could not see putting him through that.

Magic was a grade A racer in Iowa. He even fathered a few pups that raced. He was adopted in Iowa and his family eventually moved to Ohio. There, he was turned into a group (good people we know) when he bit a child for falling on him. It certainly was not his fault, but we know how these things go. We helped the group in Ohio when they found themselves overwhelmed with senior returns. In January we brought in Magic along with Sheba and Shadow. Of course, we know that Sheba and Shadow found the perfect home! But we knew when Magic was diagnosed with cancer that it was going to be next to impossible to find him a home. So he stayed here with us and we loved him dearly.

Magic never came close to biting anyone or anything here. He was the most gentle and loving creature. Magic loved to run. He ran like the wind in our field. We could always see the good racer in him. We know that he is running like the wind at the bridge with no tumors or limitations. He was a very big dog, a gentle giant, and his presence will be missed here in so many ways.

Rest in peace our wonderful boy.