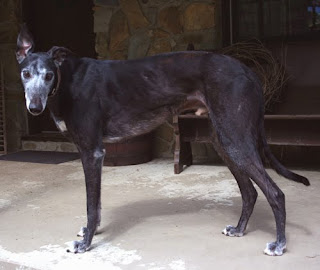 We got a call from Brenda Morrison yesterday. She finally was able to talk about losing her precious Jetty. Brenda adopted Jet from our group in early 2008. He had a wonderful home with Brenda and her mother. But Jet got sick last month and Brenda took him back and forth to the vet to try to find out what was making him feel so badly. The bottom line is that he went in for the last time on November 23 and was diagnosed with an autoimmune mediated deficiency. Brenda went to see him for the last time and let him go to the Rainbow Bridge in her arms.

Brenda was not expecting this. Jet was only six years old. We have to say it again but we loved this dog! He was a wonderful, good natured and happy black boy that was the biggest smiler of all the greyhounds we’ve ever seen! He showed every tooth in his mouth when you talked to him! We’ve known Brenda for a very long time. She has adopted six dogs from our group over the years and had greyhounds before when we were working for another group back in 2000. We know that Brenda is one of the “good” adopters who loves her animals and takes such good care of them that we’d leave every one of our dogs with her if we had to leave them with somebody.

She lives right down the road from us and we get to visit her often and spend some time with her four other greyhounds. We always looked forward to Jetty’s wonderful smile. We’d be sitting at the table talking to Brenda and glance over at Jetty and he’d give me this big smile! He died way too young but we do know that Brenda took care of him and loved him like no other human could.

Brenda was so heartbroken that she could not talk about this and finally decided to call and let us know. We surely shared some tears together.

Rest in peace dear Jetty; we will miss you so much. But we know that you were in the best hands and are now in a good place. Watch out for all of the other FFGR hounds that have gone before you. Too many and way too young.