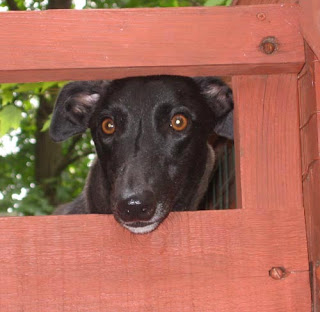 We are heartbroken to report that yet another FFGR, Inc. greyhound has been sent to the Rainbow Bridge. We got the following email yesterday from Leo’s adopter, Mary Anne Golling:

It’s with a heavy heart that I must inform you that Leo is now waiting for me this side of the rainbow bridge.

We do not know exactly what happened – but Leo ended up with fractures in his neck and back after taking a tumble running his “track” in the yard. He was unable to stand or move his back legs.

After several days in the emergency veterinarian hospital, he was unable to eat or drink, stand or move anything beyond his neck/head.

After a long night, he was failing rapidly. I made the decision to let him go as I could not bear to see him in pain and so heavily medicated; he went to the Rainbow Bridge with dignity and peace.

When the foot prints on my heart are not so heavy, I may find room in my heart for another grey.

We placed Leo with Mary Anne and her husband back in June of 2006. Leo was a little guy – only 58 pounds – and very shy! This was in the early days when we took applications, processed them and then we ordered the greyhound and people waited for “their” greyhound to come in. They came and met “their” greyhound and after a week in foster care, they took them home.

When Leo arrived for the Gollings, we saw a very small and frightened greyhound! What a sweet boy! I immediately took to Leo, this shy and tiny black boy. I worried that Mary Anne might not like him or not want a dog that was so shy. At the time I decided that we would keep him if he didn’t work for Mary Anne. But she walked in, took one look at Leo, and was thrilled at meeting her new greyhound! Mary Anne saw what we saw in him. She took him home and loved loved loved him. They live near the railroad tracks at Point of Rocks and Leo was so afraid of the trains! It took a very long time to get him used to those awful scarey noises. But there were never any complaints from Mary Anne. She worked with him and eventually he got used to his surroundings and became a very outgoing and friendly dog. I got to see Mary Anne and Leo many times over the years and each time Mary Anne remarked about what a great boy he was. And Leo always looked like one very happy boy!

Leo was six years old last July. We know that he got the very best home possible and, although his time with Mary Anne and her family was way too short, Leo had people who truly loved and appreciated him for what he was. That’s all the we hope for when we place a greyhound in a home.