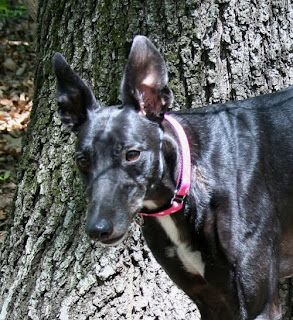 We sadly report the loss of another beloved greyhound. We received notice from Danielle and Keith Duggan that M’s Free Power (Irish) lost a battle with an undiagnosed illness. She was only seven years old. Here is the report we received:

Just wanted to give you word that Irish (M’s Free Power) passed away this morning. We had to put her down because of an explained, continuous high fever (104). It was a difficult decision because they couldn’t find the source of it, no tick bourne illness, no cancer, no pnuemonia. Her white blood cells and platelets were extremely low on Tuesday, but she seemed to be on the mend by Saturday. Overall, she got weaker and thinner in the past two weeks, and stopped eating… I am of course, heartbroken, because she was so young, only seven and the fact that it made the decision harder because they couldn’t find the cause.

Danielle and Keith adopted Irish several years ago after she had been returned to our group with a host of behavior problems (reported by her previous adopter). Dan fostered Irish for awhile and none of us could detect any kind of problem whatsoever. She was a happy and well adjusted dog that got caught up in her human’s problems.

Danielle and her family visited Irish at a meet and greet and it only took that one meeting to decide that they wanted to adopt her. They already had adopted a greyhound from us so they added Irish to their pack. Irish fit in perfectly with this young family. She was fine with the kids and never had any problems.

We know that losing a greyhound is difficult but the loss of Irish during the holiday season and from an undiagnosed illness makes it that much more difficult. We know that Irish had the very best home where she was greatly loved and appreciated. We thank the Duggans for giving Irish the chance she deserved.