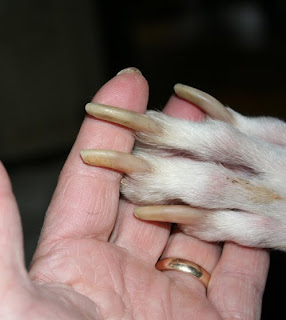 Do your hound’s nails look like this??? What is wrong with this picture? Did you know that overgrown nails can be hazardous to your hound’s health? Overgrown nails may cause your hound’s toes to splay. This can adversely affect his gait, and can actually cause many other serious medical problems. The nails force the dog to rock back on his foot and carry his rear legs much farther forward under his body. Many times dogs get injured while running in their yards and some of those injuries can be attributed to the dog over-compensating because of overgrown nails. Neglecting regular nail trimming and maintenance may even lead to early arthritis, crippling, and broken bones. (Remember, greyhounds have more delicate bones than other breeds of dogs.)

The main reason people do not keep up with regular nail trimming is because they are afraid that they might hurt their dog. People shy away from trimming with hand clippers because they can remove too much nail (causing pain and bleeding), not enough nail, or cause the nail to splinter and have rough edges. These sharp edges can scratch your skin and snag your carpeting and clothing. But neglecting nails is even more hurtful in the long run. Long sharp nails are more likely to get caught on things which can rip the nail from the dog’s foot. This will result in a lot of needless pain for the dog and pain in your wallet. Having to take a dog to a groomer often enough to keep the nails trimmed can be expensive and time consuming. The best option would be to learn how to do the trimming and keep practicing until you feel comfortable.

Usually, during the warmer months, long walks on sidewalks and asphalt can trim nails down a bit. However, in the colder months, when the dogs are not out walking as much, nails can often get out of control if they are not trimmed regularly.

Some people cannot get their hound to be quiet and still long enough to do any nail trimming. Here’s where patience and persistence pays off. When we try to calm our hounds by crooning and petting, we inadvertently send the message that it’s OK to panic and be difficult. The best way to handle squirmy and whining dog is to take charge and clip one or two nails at a time (as quickly and safely as possible) and then praise the dog for being good. Keep this up until you can do all of the nails on one paw, then move on to the next. You might even want to start by doing one or two nails a day and only remove the very tip of the nail. That way you are working too quickly for the dog to react. You can always perfect your clipping once your dog gets comfortable with being touched. Remember, if you allow your hound to control the situation, your dog will never be willing to cooperate and nail trimming time will be a job that will always be dreaded (by dog and person).

If your dog’s nails have been neglected over a long period of time, they may seem very long even after they have been cut. That might be because the quicks have been allowed to become overgrown too. The quicks are the vein inside the toenails and the part that bleeds if you cut the nail too short. You can solve this problem. The quicks can be made to recede over time by cutting the nails frequently over the course of a month. Then, once you have gotten the quicks to recede, it will be easy to keep the nails short all the time. If you noticed when you adopted your greyhound, they most likely had very short nails! That’s because they are kept very short at the track for racing. The quicks have receded way back in the nail from frequent trimming. This is actually the way your dog’s nails should look all the time for optimum health. 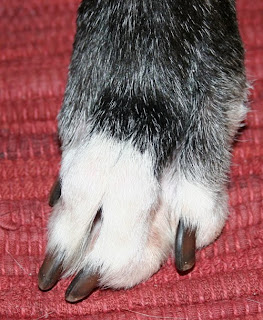 How short should your hound’s nails be? A good rule of thumb is that the nails should not touch the floor when the dog is standing (see photo above). If you hear clicking when the dog walks you need to get the nails shorter. Although it sounds like a daunting job, if you clip often over the course of a month, you can get your dog’s nails short enough that you can do regular trimming without much effort after that.

If all else fails and you just do not want to use the nail clippers, you might want to try a grinder. These small battery motorized tools can be bought at most pet stores or hardware stores (a dremel tool). The tool has an attachment that looks like sandpaper that is actually a stone. It will grind the nail down much like the way we file our own nails. This is relatively painless and many dogs don’t seem to mind the sound because the tools operate quietly.

If you choose to try one of these tools, just remember to use short strokes on each nail, work slowly, and keep the nails from heating up. You do not want to set the grinder down on one nail for too long. It will burn! Also, most dogs won’t react as badly if you hit the quick doing the light short strokes as you can monitor your progress better. This is a great option for dogs that have black nails. There are a lot of sources on line that provide good instructions for grinding.

If all else fails and you have a “screamer” that will not allow you to touch his/her paws (some greyhounds actually HATE having their feet touched), then a groomer might be your best bet. Pet stores like Petsmart and Petco are inexpensive and the groomers there work very efficiently. If you take your hound for a nail trim, remember to take a copy of his/her rabies certificate which is required in most grooming establishments. They will keep it on file for you. Considering the cost of vet bills stemming from poor nail care, this may be the best money you spend on your dog!